At the Shop of the Gyzi Megaron Museum visitors are welcome to select from all the editions of the Gyzi Megaron Cultural Centre, many books and photographic albums referring to Santorini and the wider Cycladic area, authentic lithographs by prominent Greek artists with Santorini as theme, replicas of the exhibits of the museum΄s permanent collections, such as replicas of old authentic engravings from the 15th to 19th century, which represent maps, locations and attire of Santorini.

Dominant position at the Museum΄s Shop has the latest edition of Gyzi Megaron, a bilingual publication entitled “Santorini – Engravings and Drawings by Greek Artists”.

In addition, the Museum΄s Shop offers exclusively a coloured lithograph by the popular Greek artist Miltos Pantelias, in only 99 authentic copies, numbered and signed by the artist, who engraved it in 2007 especially for Gyzi Megaron.

The Shop aims at a wider spread of the Museum΄s exhibits as well as to financially support the Museum and its cultural activities.

The Gyzi Megaron Cultural Centre, furthering its spiritual and cultural activities, has published four notable editions about Santorini and Cyclades. 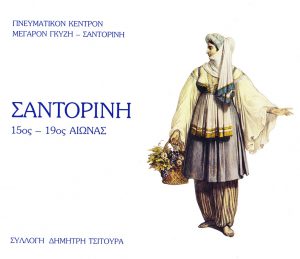 At the Shop of the Megaro Gyzi Museum visitors are also welcome to select, besides the Megaro Gyzi editions, from other publications referring to Santorini and the wider Cycladic area.

Some of these publications are mentioned below:

The well-known painter and engraver Miltos Pantelias engraved in 2007, especially for Megaro Gyzi, a lithograph with Santorini as theme. It is the work entitled “Ia at Sunset”.

“At this work the dome and the belfry of a church muse to the infinitude of the sky and sea. The atmosphere born a poetic mood and the feeling to abandon yourself to the immensity of the landscape“, mentions the Art Historian Mr. Nikos Grigorakis.

This coloured lithograph, in only 99 authentic copies, numbered and signed by the artist, is offered exclusively at the Shop of Μεgaro Gyzi Museum for 100 €. 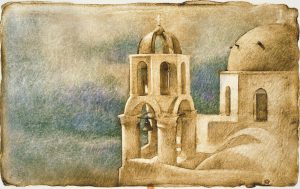 Miltos Pantelias CV
Miltos Pantelias΄ first teacher was his uncle, the well-known engraver Fotis Mastichiadis. From 1974 to 1978 he studied at the Ecole des Beaux-Arts in Paris under L. Coutaud, J. Lagrange and G. Dayez. He works with engraving as well as painting, especially though with drawing. His work is anthropocentric with the female figure playing a major role. The predominant characteristic of his artistic language is the re-establishment of pictorial values and their re-evaluation under a new optic angle.

In his latest work, Pantelias gives the feeling of decay through time, interrupting thematic integration in favour of freedom of design. This, for instance, is achieved by interrupting the surface of the drawing by tearing the paper, or by breaking the composition, which is now presented in two different pictures within the picture (still without losing its unity), or by the unorthodox building of different compositions. He thus destroys the image of α “classic” beauty, creating a new aesthetic suggestion that unites old and new.
Miltos Pantelias, one of the most popular Greek artists, has presented his work to many individual and group exhibitions in Greece and abroad, especially in France. His work can be found in many public and private collections, both in Greece and abroad.

At the Gyzi Megaron Museum’s Shop visitors are also able to find, for 5 € & 10 €, replicas of old authentic engravings from the 15th to 19th century, which are exhibited to the Museum. These old gravures represent maps, locations and attire of Santorini.

A set of 40 cards representing old gravures from all over Greece is also available at the Museum΄s Shop for 10 €.

At the Gyzi Megaron Museum’s Shop there is a wide variety of various decorative and other useful items inspired by the details of the museum’s exhibits, which can be an excellent memento or a tasteful gift. 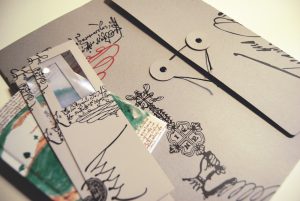 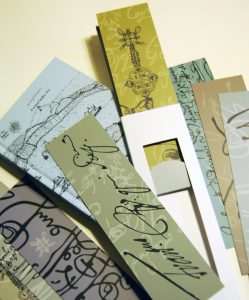 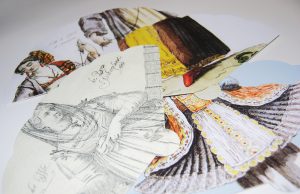 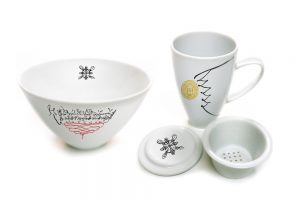 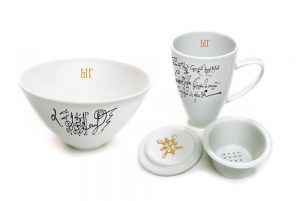