If you are lucky…

For Santorini, the volcano is both creator and destroyer. It shaped the character of the civilization which developed on the island and which continues to flourish there. When it extinguished every trace of life and civilization in the tremendous eruption of around 1600 BC, it buried an incalculable wealth of information on the material culture of the civilization that flourished in the Aegean in the Bronze Age, information which constitutes an invaluable chapter in the history of mankind, and a source of prosperity and enrichment for the island’s present inhabitants.

Santorini’s arid but fertile volcanic soil obliged its inhabitants to develop methods of cultivation unique in the Aegean islands. Barley, split pea (fava), lentils, peas, various types of grapes and wines have been the mainstay of the island’s economy since prehistoric times. The people of Santorini burrowed deep into the volcanic ash to build their cave-like dwellings; with volcanic materials, they roofed their free-standing buildings, evolving a new technique of vaulted construction. The dramatic and diverse landscape of this island, so scarred by the activity of its volcano, now offers aesthetic delight to the millions of visitors, providing another source of income for the islanders and contributing to the change from subsistence to a consumer society.

It is difficult for anyone who has not actually experienced the volcano to understand the way in which the people of Santorini seem almost to identify with it. The volcano brings you face to face with the bowels of the earth, and reveals in an incomparable – and formidable – way of nature. Between the huge catastrophic eruptions of the volcano, there occurred many less devastating ones. While these were certainly terrifying to the inhabitants of the island, they also enabled them to witness first hand one of the processes of creation; a process which raised up out of the depths of the sea the geographical space they chose to settle. 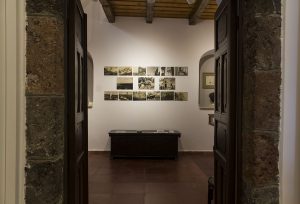 After the sack of Constantinople by the Crusaders (1204) Thera or Santorini becomes part of the Duchy of the Archipelago. The Venetians become lords of the island. The new capital is built on the rock of Skaros. The island is ceded as a fief to Giacomo Barocci (1207).

Information about the life on the island during this period is scarce. Documents found in the Venice Archives suggest that Santorini was a main port of call for merchant ships from Venice to Crete and the Middle East. The island does not seem to have been financially self-sufficient. From 1309 until 1316 the lord of Santorini Andrea Barozzi requested and was granted the permission by the Venetian Senate to procure wheat for the needs of the island. Much later, in 1405, there is evidence of some activity connected with processing cotton, which was imported from Crete at the time, and therefore also with weaving.

During the years 1537-1566 Santorini passes to the Ottomans. In 1579 Venetian rule is brought to an end by the Ottomans, after the inhabitants suffered from the raids of the notorious Hayreddin Barbarossa and the autocratic power of Joseph Nazis, favourite of Sultan Selim II (1566). In 1580 Sultan Murad III granted preferential treatment giving the islanders tax deductions and special privileges such as guarantee of religious freedom, judicial autonomy and respect of the citizens’ property.

During the Ottoman period, Santorini is divided into 5 administrative regions (Kastelia) (English; castle). The residents of each Kastelli elect seven commissioners (agents), who formed the supreme governing body. The castles were:

The important military events unfolding in the Aegean in the 17th and 18th centuries between the Turkish, the Venetian and the Russian fleet dragged Santorini into their impetuous whirl.

Nineteenth century was a period of prosperity for the island. Santorini was a major naval power during the Greek War of Independence (1821). It became part of the free Greek State in 1830. In 1850 the island was the 5th naval power of the newly established Greek State. It prospered in the fields of merchant shipping and industry (wine, textiles, tomato paste) until the early 20th century. Santorini brandy received an award at the 1900 Paris Exhibition.

The first decades of the twentieth century marked the beginning of the island’s decline. Theran shipping delayed in switching from the sail to steam, losing ground, while major industrial units of the island were moved to Attica. The end of the Second World War signalled urban drift.

The 1956 earthquake dealt the final blow to the island, not only destroying its buildings but also bringing economic disaster. The island’s depopulation was great.

However, since the 1970s to date, the tourist flow has taken on impressive dimensions, leading the island to a new type of recovery and making it the world’s attraction.