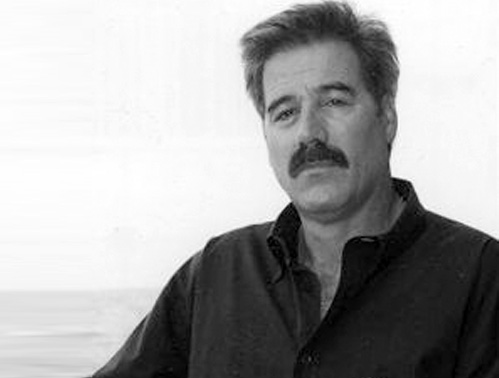 During the painting exhibition of Roubina Sarelakou with title «Crete of Love», from 17th to 31st August 2007, a concert of traditional cretan music will take place with Vassilis Stavrakakis and his group, people who were source of inspiration for works of this painting exhibition. Vassilis Stavrakakis and his group play beautiful traditional Cretan music, with a combination of old and new songs. There are a variety of tunes – some wonderful melancholy numbers, slow and nostalgic, but also a collection of uplifting and vigorous tunes. We can especially enjoy the Mantinadhes (Cretan limericks) about the sorrow of love, but also about how love brings joy and meaning to life at any age. Vassilis Stavrakakis, with his robust, mature voice and the endless liveliness of his performance, provide such musical joy to the audience and is considered as one of the best artists of traditional cretan music. His work is characterized by its quality and respect to tradition, because he refuses to introduce elements which would debase the attributes of Cretan music.

Born in Armanogia of Monofatsi, Crete, Vassilis Stavrakakis had the opportunity from an early age to live in a pure musical environment and become an inextricable part of it. He made his first appearance in recording at the end of the ΄80s as the main singer in two albums-benchmark in the course of the Cretan traditional music and its revival («Oneirou Topoi» & «Labyrinth»).

His career includes personal recording works, participation in works of other composers, as well as appearances within Greece and abroad in concerts and traditional fests. He has cooperated among others with Ross Daly, Michalis Stavrakakis, Yorgos Xylouris, Yannis Xylouris, Yannis Markopoulos, Chainides, Zacharis Spyridakis, Stelios Petrakis, Antonis and Michalis Fragiadakis etc.

Stelios Petrakis was born in 1975 and he was raised in Sitia, Crete. In 1983, he enrolls in the Music School of Sitia. Under the surveillance of Kostas Mountakis he studies with the teachers Yannis Dandolos, Ross Daly and Eleni Drettaki. He completed his studies on the lyra in 1993.

Since 1993, under the guidance of Ross Daly, he continued to study this instrument and at the same time he turned to the study of related musical traditions (popular music of Anatolia, classical music of Constantinople, traditional music of Greece) and instuments (saz, Cretan laouto, lavta, boulgari, Cretan lyra, kemence). During the years 1999 and 2000, he attended seminars for the saz at the Musical Workshop «Labyrinth» with the master musician Talip Ozkan. In Labyrinth, which in the meantime relocated in the village of Houdetsi near Heraklion, he attended a series of seminars during the summer of 2003 given by masters of musical instruments and traditions of the orient.

Since 1998 he has been working with Yorgos Xylouris in concerts and traditional celebrations in Crete and abroad (Italy, France, Canada), and with Bijan Chemirani in concerts and recordings in Greece and France (Marseille, Nice, Toulon, Correns). In 2002, he founded together with Bijan Chemirani and Patrick Vaillant the «Trio Meltem», which presented the composition of its members in concerts in France. Recently, he took part in recordings by the group «Dupain», which resides in Marseille. Lately, he has presented his own music in concerts in Greece and abroad (Paris – Audiotorium Saint Germain, Marseille – Stricktly Mundial 2002, Music Workshop Labyrinth Summer 2003, fortress Kazarma of Sitia, Etia of Sitia).

His first recordings, work under the title «Stin akri tou dounia» received favourable reviews and was acclaimed by both the international and greek press.

He also makes traditional musical instruments such as the lyra, the laouto, the saz and he is a graduate of the Law School of Athens. 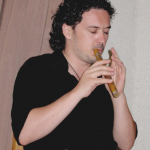 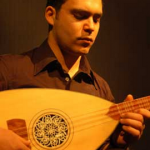 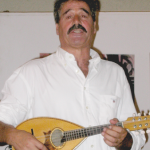 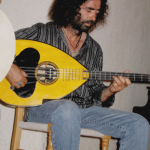 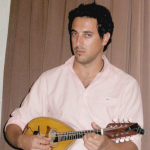 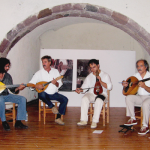 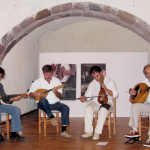 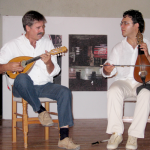 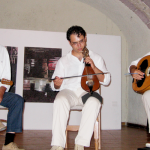 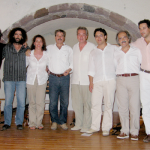 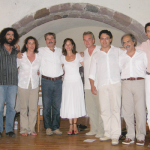 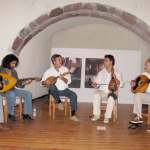 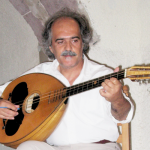 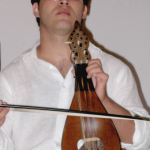 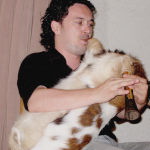