Trio el Greco was formed in 2016 by three musicians of different backgrounds, that are now based in Athens.

They have performed in classical music venues such as the Foyer of the Greek National Opera and Filippos Nakas Hall, at the National Bank of Greece Cultural Foundation, and in theatres in Athens (Porta, Sfendoni).

They are also engaged in summer festivals outside Athens in 2016 (Koroni Festival) and in 2017.

Eager to explore the whole of the repertoire, Trio elGreco is currently focusing in the Classical period -they recently performed the entire opus 1 by Beethoven-, planning the near future interpretations on period instruments. 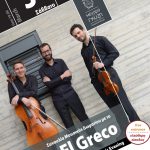