Spanish guitarist Susana Prieto and Greek guitarist Alexis Muzurakis made their debut as Duo Melis in 1999 at the International Guitar Festival of Volos (Greece). Since then they have performed in such prestigious halls as the Berlin Philharmonie, the Concertgebouw in Amsterdam, the Tchaikovsky Hall in Moscow, the Megaron in Athens,and the Merkin Concert Hall in New York.
Duo Melis has collaborated with the Berliner Symphoniker, the Neubrandenburger Philharmonie, the Bayerische Kammerphilharmonie, the Radio Orchestra of Bucharest, and the National Orchestra of Thessaloniki conducted by Leo Brouwer.
Recent appearances in North America include the Guitar Foundation of Americas Annual Convention, and recitals in Chicago, St. Louis, Austin, Scranton, College Station, Houston, Brownsville, and Detroit. They have appeared twice for both OMNI Concerts in San Francisco and the Cleveland Classical Guitar Weekend. They were featured artists at the Bethlehem Guitar Festival in Pennsylvania. In Europe, they have presented recitals in Italy, Greece, Germany, Poland, Russia, Spain, Rumania, Holland, Czech Republic, Austria, Norway, Sweden and France. Since 2006 Alexis and Susana teach at the Conservatoire National de Strasbourg in France. 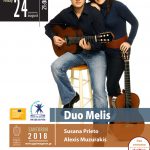